Yes, Ontario can make rich, ripe reds — in a wine region you might not expect

Yes, Ontario can make rich, ripe reds — in a wine region you might not expect


Niagara has loads of land under vine and Prince Edward County is certainly hip and
cool, but Ontario’s third major appellation can produce rich, ripe reds like nobody’s
business.

I’m talking about Lake Erie North Shore (LENS), a region that stretches along the
shoreline of Lake Erie from Amherstburg to east of St. Thomas, including the South
Islands. LENS is Ontario’s — and indeed Canada’s — most southern wine region. Its
vineyards get more heat and sunshine than anywhere else in Ontario, creating a
climate much like parts of California — and the wines follow suit. In other words, if
you’re a fan of big reds, this is the region for you.

Muscedere — pronounced moo-SHED-re — is a small, family winery with deep
Italian roots in Harrow, Ont. And it makes shockingly good wine from its fivehectare
vineyard of hand-harvested grapes.

If you appreciate the suave, silky yet powerful appeal of a Barolo, you’ll want to get
your hands on the newly released 2017 Muscedere Nebbiolo, VQA Lake Erie
North Shore ($80.20). But the winery only made 40 cases, so it will sell out fast.
Nebbiolo is of course the grape variety of Barolo and is difficult to find outside its
native region of Piedmont, Italy. But this winery grows it and is clearly capable of
making marvellous wine with it.

The 2017 Muscedere Nebbiolo shines pale ruby-amber, as you’d expect for
Nebbiolo, which can turn slightly amber early despite its long aging potential. The
aromas are seductive, allusive. Dried rose, gentle blackberry and black pepper
aromas merge with shy suggestions of caramelized meat drippings. It streams in
with a glossy mouth feel then unspools with elegant fruit — black fruit mostly —
laced with an intricate tapestry of flavour that echoes the elements found on the
nose. A light little tug on the finish lends just the right amount of structure to each
sip. Though this wine isn’t velvety and fruit forward like, say, a Cabernet
Sauvignon, it’s still a powerhouse packing 14 per cent alcohol. Score. 93

If you prefer plusher styles of red, you’ll like the 2017 Muscedere Meritage, VQA
Lake Erie North Shore ($30.20). The winery made 170 cases of this wine and just
60 cases are left. Meritage — which rhymes with heritage when pronounced
correctly — is a Bordeaux-style blend.

With 60 per cent Merlot, 30 per cent Cabernet Sauvignon and 10 per cent Cabernet
Franc, the 2017 Muscedere Meritage exudes a heady fragrance teeming with plump
red and black fruit laced with a touch of sweet almond and plum pudding. The
entry drenches the palate with a velvet sweep of blackcurrant liqueur and damson
then shifts slowly toward spice cake and sultanas, dried currant, fig and nut. The
finish is long, and the wine dry and complex. Score: 94

A bit of a steal is the 2018 Muscedere Cabernet Franc, VQA Ontario ($19.20).
About 400 cases were made and about 300 cases are left. This red shines deep ruby
and opens with dark fruit on the nose before saturating the palate with plush depth
spiked with bright acidity that keeps it fresh and bright. The flavours suggest
damsons and blackberries threaded with hazelnut from time spent in oak. After the
entry, a touch of black olive slowly emerges and lingers on the finish. This wine is
lively enough to keep you sipping and ripe enough to satisfy the hedonist in you.
Score: 93

And for that porch-swing-in-the-afternoon quencher that’s perfect after some
autumn yardwork, there’s the 2020 Muscedere Rosé, VQA Ontario ($17.20).
Ninety-six cases are left of the original 260 cases made. It blends 95 per cent Vidal
with five per cent Cabernet Franc to create a pretty pink vino with the fragrance of
sugared rhubarb and the lip-smacking flavour of homemade strawberry rhubarb
pie. A bright, crisp wine with fabulous purity and balance. Score: 92

Muscedere wines are not sold at the LCBO. They’re only available at the winery and
through its website. And if you visit the winery, stay for its wood-fired pizza and a
glass of something on its patio that’s a stone’s throw from the vineyards. Even the
gluten-free pizza is excellent! 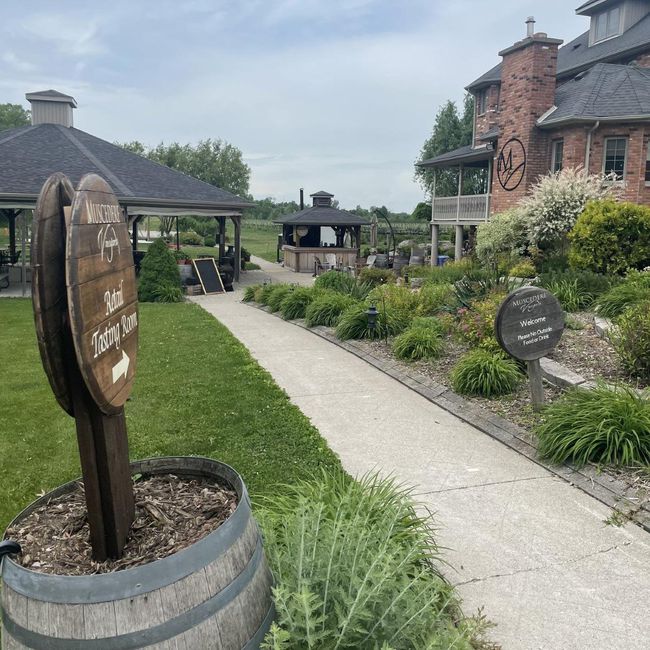